Asmaa is a 10-year-old girl with Down Syndrome. She comes from a family of five, father, mother and three children. She was displaced from Jisr ash-Shughur and currently lives in Jdaidet al-Wadi. Her father is a low-income farm worker. The girl came with her mother to the Beit as-Salam Community Centre, al-Hamah, in early 2020.

When the Beit as-Salam mobile team monitored her case during field visits to the Jdaidet al-Wadi area, Asmaa was nine years old and possessed some simple skills that were identified after her abilities were duly assessed according to the Portage Programme checklist.

Asmaa could get dressed and undress on her own and do simple self-care tasks (toothbrushing, combing hair, using the bathroom without help). She could also hold a pen the right way. In addition, she was responsive most of time to the requests of adults. Therefore, based on the girl’s strengths, we started working according to the Programme to strengthen her weaknesses in the weekly sessions at the centre, in addition to working with her at home based on the agreed-upon family plan that was handed over to Asmaa’s mother by the HBRP specialist for PwSN.

During the puzzle-assembling sessions, Asmaa was immediately able to assemble a 4-piece puzzle, and then move to a 9-piece puzzle successfully. Later, within the home-based training, Asmaa was able to put together a 24-piece jigsaw, making sure that she always recognized the experiences in each puzzle (seasons, family, animals, etc.). 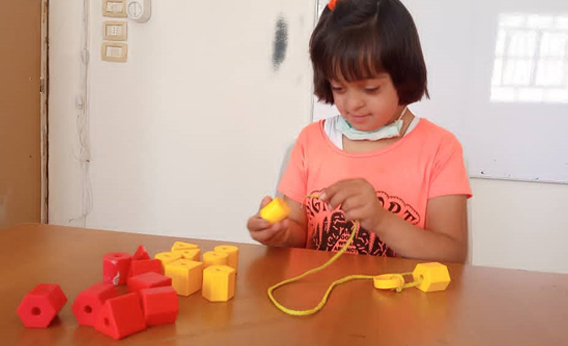 Asmaa also trained in matching geometric shapes, recognizing the square, triangle, rectangle and circle, and matching wooden pegs, the simple stages first and then moving to more complex ones. Her performance was invariably very good.

We worked with Asmaa to develop her fine motor skills, as well as visual-motor synergy, by using scissors and cutting paper in straight lines, then cutting out a square and a circle, threading beads and sorting them according to colour.

Based on Asmaa’s ability to hold the pen correctly, she began to practice drawing vertical and horizontal lines, squares and circles, copying the Arabic alphabet and numbers from one to twenty, and writing some simple words: her name and the names of her mother, father, and the rest of the family, and many common vocabularies. 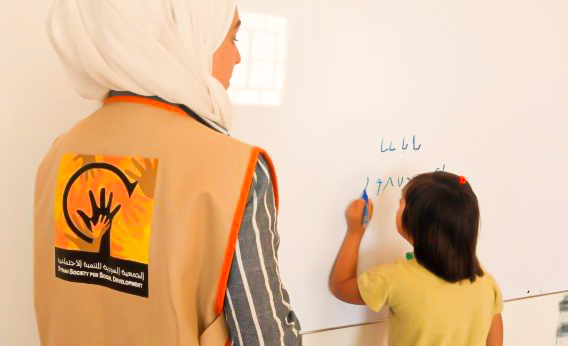 Now, after a full year of working with Asmaa, and based on her parents’ belief in their daughter’s ability to learn, their commitment to attend the sessions and carry out what is expected from them at home according to the family plan, Asmaa is able to add and subtract numbers within the number 10; she can read and write, and has the ability to distinguish colours and geometric shapes, in addition to a significant autonomy in using the bathroom, brushing her teeth, getting dressed and undressed. She helps her mother with daily routine activities, like placing dishes on the table, wiping the table, folding the laundry, tidying the room and putting away her toys on a daily basis.

Now at the age of ten, Asmaa has qualified to take a placing test at the Ministry of Education to integrate her into the primary school grade 1. After the satisfactory results obtained through the rehabilitation sessions carried out in the context of the HBRP at the Beit as-Salam Community Centre, her parents are very happy with the stage their daughter has reached and believe in her ability to learn, acquire skills and experience, and integrate healthily into the community. 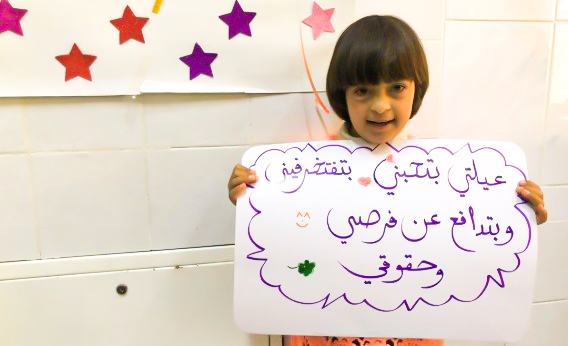 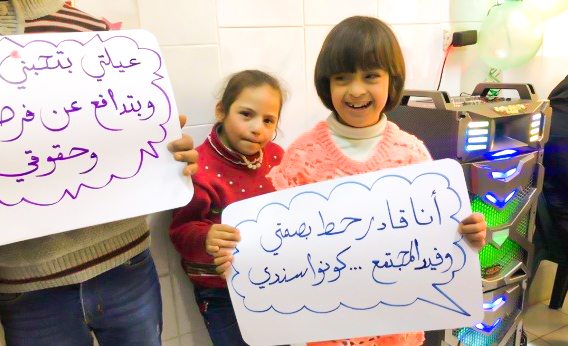 Asmaa is a girl like other love angels, able to express her needs, carry out her duties, and claim her rights if she finds appropriate support from both family and community.

Asmaa’s parents are proud of their daughter and advocate for her opportunities and rights to learn and integrate with peers to help her leave her own mark in society.