A Lantern from Rabih 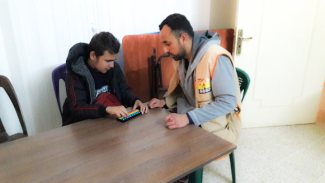 Rabih is a 13-year-old boy who lives with his small family in Ras al-Naba'a in the city of Banias, belongs to a poor social environment in which the head of household works as a builder while the mother is a housewife.

He was born blind and away from the simplest means of communication and education because the lack of knowledge of his parents about the possibility of joining the school, but the ORVs team was able to reach the case of the child and introduced him and his family to SSSD and its programs, especially regarding the blind, where Rabih parents expressed their desire to benefit from the Community center Beit al-Yasmin.
The child and his mother were invited to attend one of the sessions in the community center for Activating the Blind and during his first visit with his mother, his case was examined by the case manager at Beit al-Yasmine at the presence of the facilitators of the sessions.

After assessing the need, the case management team joined Rabih in the Friendship Group for Blind Children. In that visit, Rabih and his mother knew about the Braille machine for writing and reading for blinds. They also learned about the activities that are carried out at the center that aim to develop the personality of the blind in a way that allows him to interact with the surrounding society the thing that encouraged him to commit to the friendship group hosted by Beit al Yasmine.

At first, the facilitators noticed that Rabih had a state of hesitation and fear through speaking in a trembling, low voice and rejecting any request directed at him and by walking with a twist as well as confusion and hesitation in the steps. The facilitators began to activate Rabih and rehabilitate him in order to interact confidently by applying games that develop personal skill and give him courage.

After some time, the child was able to interact with the facilitator gradually and began to respond to the requests of the facilitator regarding implementing the activity and then define the directions to him and move in the activity room according to the direction that he was asked to go to, through using music to move in the required direction.
After a month, facilitators implemented a sporty activity to enhance his confidence by walking straight and using the directions quickly in addition to strengthen his courage to step fast through focus points such as ropes or walls of the room.

During the second month, the facilitators began to introduce the child to Braille system for writing and reading. His mother attended the sessions in order to help him with response. With the assistance of the facilitators and his mother's, Rabih managed to memorize the number of each letter in an excellent way, which became clear through his test at each of Braille sessions.

In each session, the facilitators conducted a debate between the beneficiaries so that each one asked his friend about a certain letter and then his friend answered with the number of the letter that asked him. Then he checked for his friend. This gave Rabia an opportunity to develop his character further when he felt superior to his friends.

He also received a course in mental arithmetic using the abacus Within the program of intellectual development by conducting calculations by touching the abacus and knowing the number of beads. He liked the idea a lot because it has a kind of competition with his blind companions. Conducting mental arithmetic at a speed created a kind of zeal with which he was cared for and developed repeatedly until he was able to do the calculation through imagination and without using the abacus.

This led to introduce a state of joy and hope to his life, he rejoices greatly in every calculation, especially when the answer is correct, which gave him a self-confidence and increased his brain capacity after being slow and suffering from being alone with his mother at home, he emerged from the darkness of life to light with his activities and skills that began to develop little by little.

It is noted that Rabih did not miss any session since his first visit to the CC, moreover, he was calling if the bus delayed to take him to the center. He also showed a desire to follow up on teaching and achieving his dream of obtaining a certificate of basic education. As he moved from the stage of hesitation and fear to activity and interaction so that he tells, in every session, a story or read aloud.
Rabih is a child whose circumstances did not allow him to exercise his right of education despite having potential capabilities, but the team of the Syrian Society for Social Development- Beit al- Yasmine- managed to restore hope for a bright future through what he received of advantage and rehabilitation.