Today is the Culmination of my Success 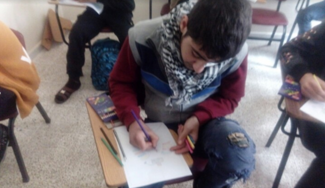 A.TH is a 17-year old young man coming from an internally displaced family.Speaking about his life, he always used the word “loser”, particularly when referring to his failures: failing the ninth-grade national exam, dropping out of school, and being admitted into Khaled Ibn Al-Waleed Juvenile Center for abusing and selling drugs.

He joined the school attached to the center following his parents wish.

He missed out on many classes and teachers always complained about his attitude in class. His only response to the teaching staff corrective instructions was, “I am a loser, that’s what my father and mother have always thought of me, I don’t understand why they want me to go back to school now!” Then he began talking about his school drop-out experience:
“I had an eye removal surgery at my early childhood days due to a tumor and my parents couldn’t afford an artificial eye. My embarrassment of my face appearance doubled and tripled as days passed by, and I let my hair grow long to hide my face.

That day was the breaking point of my life, I decided not to return to her school, I thought I was able to carry on with my education somewhere else and avoid such unjust rules.”
He carried on, “For the second time in my life, with my parents’ tight financial abilities, I was not able to join a private center, and thus resorted to self-study, it was very tough experience, I was doomed to fail. My parents blamed me for quitting school and I heard the word loser a thousand times. I spent long hours on the streets to avoid hearing that word and met new friends, who were more understanding and encouraged me to work to prove that I am not a loser.”

“After sometime, I worked in a bakery oven; however, my self-esteem was still distorted, whenever I looked into my parents’ eyes, the word loser flashed, and sadness became my closest friend. The owner of the bakery oven gradually became a close friend of mine, one day as I was opening up my heart about my disappointments, he gave me an illegal street drug, the relief and ecstasy I felt were great.

I have been using drugs from that day onward, they help me escape the bitter reality. However, I found myself in need of more money, so I decided to sell drugs. Working as a dealer, I was arrested on the very first day and admitted into Khaled Ibn Al-Waleed Juvenile Center.

My parents want me to return to school, but I can’t wait to be discharged to rework in drug selling, it is my dream, I will make lots of money and prove to the world and my parents that I am not a loser.”

At that point, the education officer of the center activated her intervention with the young man:

⁻ When you dropped out of school, I noticed that you were determined on carrying on with your education. Was it just to prove to the principal that you did not need her school?
⁻ No!
⁻ What was your dream?
⁻ I wanted to be a journalist, a big shot one, I wanted to change the world with my words, I wanted to do a lot of things..
⁻ I wish you are aware of the way you talk about your dreams
⁻ What do you mean Miss?
⁻ The way you are talking is very passionate and enthusiastic
⁻ It was my dream
⁻ Let’s give it a try, you can make your dream come true
⁻ I am a loser
⁻ You faced some tough circumstances like any other person in the world. You overcame them, and you should start all over again.
⁻ So you think that I am not a loser?
⁻ You are not
⁻ Can I?
⁻ It is up to you; you have to decide.
⁻ I can

The teaching staff worked in tandem to motivate and encourage the young man and spread the word about his educational progress; however, there was a bottle neck, the teachers noticed that he was high several times and heard him talking to his peers about the positive effects of drugs on the memory and focus levels.

The education officer was direct and asked him not to use drugs when attending classes. He kept using drugs upon entering the classes, even though she kept asking him not to, up until she decided along with the psychosocial support team to put him in a situation similar to the one he faced in his old school.

She expelled for lack of commitment toward school rules. He sent her many messages through mediators, some were negative “It is better to quit school” and others were positive “I will commit”.
One day he came to her crying..
⁻ Why are you crying?
⁻ I sent everyone I know to speak to you and you did not approve my return to school.
⁻ There is one person who may make me change my mind.
⁻ Who?
⁻ It’s you.
- Remember the first time you quit school (I am not defending the principal) I think that she wanted you to believe in yourself; however, you did not understand her message and thus your reaction was not correct.

For the second time in your life, I am telling you to believe in yourself and your capabilities; overcome your weaknesses to make your dreams come true.
The discussion lasted for two hours and eventually he returned to school and passed the exam.
On the day the results of the ninth- grade national exam were announced, the young man ran all over the center crying out of happiness and saying, “I made it, I passed the exam, I am not a loser,” approaching all of his peers hugging them.
⁻ He hurriedly approached the officer saying, “I want the baccalaureate books.”
⁻ Slow down a little bit.
⁻ I want the books..
⁻ You have to register for the General Secondary certificate exam.
⁻ Explain please.
⁻ Slow down a little bit.
⁻ I want the books; I want to have a piece of my dream next to me when I sleep tonight.
Oh! Sorry Miss, I forgot to thank you.

I am grateful for the Syrian Society for Social Development.

I am grateful for the best team. Thank you very much Miss. The taste of success is very sweet. I want to accomplish more and more and be a famous journalist.
The young man was discharged from the center after few days.

Nevertheless, the team of the center did not stop its support, providing him with all school supplies and following up with him about his progress, particularly his grades and teachers’ opinions.

With determination and hard work, he carried on with his education. On the very first day of the winter term, the education officer invited the young man to Khaled Ibn Al-Waleed Juvenile Center to give a speech about his experience. He expressed a lot gratitude and appreciation and kept saying, “Failure is when you quit. You should never quit. I was able to pull it out.. all of you could be successful.

The taste of success is very sweet.”
One fine day the education officer received a call from the young man, bringing the good news of passing the General Secondary certificate Exam.

His words touched her heart, “Today is the culmination of my success. I am thankful to the Syrian Society for Social Development, I hold high respect and appreciation to the best team, I will never ever forget your support and Allah’s blesses.”